Is the default setting of all Liverpool Supporters to elevate their managers to God-like status? Neil Poole takes a closer look at this perceived phenomenon; one both derided by outsiders and protected and held tight by the club’s own followers.

When Jürgen Klopp was appointed Liverpool manager under twelve months ago, he immediately set to work managing expectations and distancing himself from the hype:

“There is no doubt, this is a huge challenge for me and my coaching team…Liverpool have not had any success for a long time and they’ve changed the manager all the time. And now they have appointed a German who is no miracle worker. Progress is not possible without a bit of time.”
No miracle worker you say?

Never has one man, so admired, been so wilfully ignored by his subjects.

Seduced by a Liverpool manager speaking sense in the wake of the vacuum left by Brendan Rodger’s superficial, middle-management chatter, we clung onto every word.

We all nodded sagely, placing chins thoughtfully between forefinger and thumb as if touched by his wisdom, stopped, and then decided, “Nah sack that. Klopp is the chose one!”

He DEFINITELY said we’d win the league in four years. Didn’t he?

The critics had their ammunition. Kopites are always looking for the next Messiah. Here they go again.
To some extent they had a point. But they ignored the nuances. But then again they would, wouldn’t they? The atheist mentalists.

The reality is that in Liverpool’s 124 year history only two of its nineteen ‘permanent’ managers are universally held-up by supporters as untouchable.

As we all know Liverpool’s genesis took place when John Houlding took a rib from Everton and formed the fine, shapely figure of Liverpool. Well, hello there! The latter would then go on to be blamed by the former for the evils of mankind for eternity.

However, despite the chronology of our creation story the reputed fore-fathers of Liverpool Football Club came seventy years later and are Bill Shankly and Bob Paisley.

The reason why is simple. They bought about unprecedented and since unequalled achievement. They intrinsically changed the fabric of the club and wove what we know as the modern Liverpool Football Club.

The tales are well-known. Shankly dragged the club up from the gutter –he described Anfield as a toilet – and built the foundations and structure. Paisley then set about decorating the living room with silver; fourteen major trophies mercilessly but majestically plundered from home and abroad in a nine-year spree.

You’ll struggle to find a devil’s advocate, never mind a naysayer, who will dispute the regard in which Shankly or Paisley are held. Only a curmudgeonly cynic could begrudge unwavering faith in the natural beauty of the new dawn and Indian summer which followed. 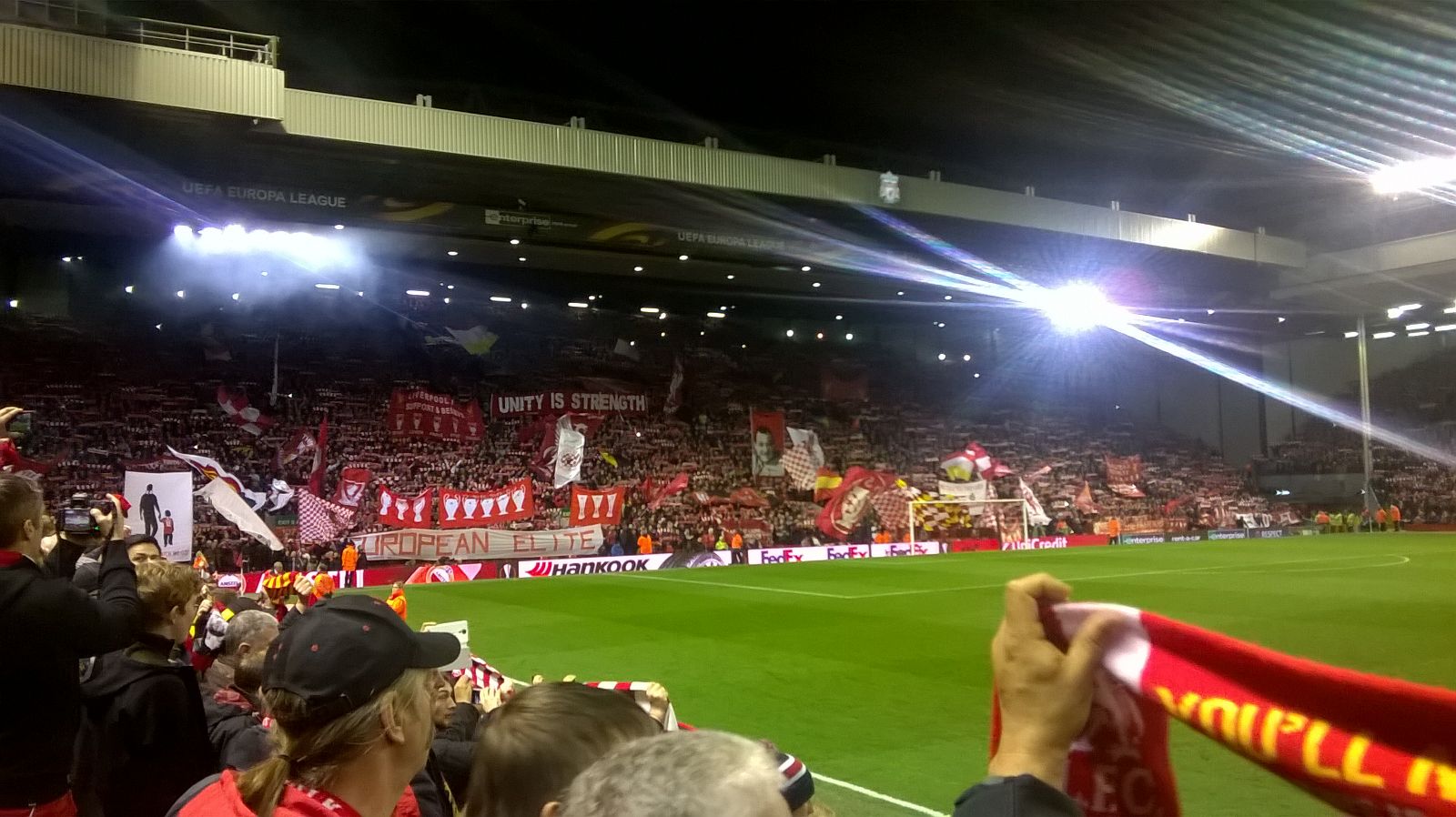 If uncleanliness is next to ungodliness then at the other end of the spectrum is exploding shit-bomb and devil incarnate, Roy Hodgson. If ever you want a riposte to allegations that Liverpool congregate like Faith Militant regardless of the identity of the Sparrow, Hodgson is your man.

He arrived with no record of success, actively fought against achieving success when in position, tried at every turn to undermine past success and then left. Yes!

Not in the same league as Hodgson, we can still unanimously say that neither Graeme Souness nor Roy Evans were ever held in particularly high or sustained esteem. They’re further evidence that Liverpool fans do not, ‘willy-nilly’, undeservedly elevate those who head up the club. Both were purveyors of solitary domestic trophies, crucially neither a league title. Liverpool mouths still salivated in the 90s from muscle memory of fruitful bounty, which neither manager could sate.

On the field it wasn’t enough. Off the field Souness culled too quickly, made too many enemies in the dressing room and then made enemies of once adoring supporters by selling his story to the S*n. Evans seemingly let the players run amok and the tenure of Roy, such a loyal servant and final link to the Boot Room, marked the reinterpretation of the holy book. Maybe the old way wasn’t the best way anymore. Maybe, just maybe this was the apocalypse.

In Fagan, Dalglish, Houllier, Benitez and even Rodgers we have the men who at some point cast their spell over a section of the support. Some, to different extents. Some still to this day, and to the bemusement of others. The variation in perception comes hand in hand with variation of circumstance.

Kenny Dalglish is a club legend. If he was a Venn Diagram (let’s call it a Ken Diagram) he’d consist of three overlapping circles: The club’s best ever player; the double winning manager in 86 and manager of the 87/88 side; and the man who gave great service to the people of Liverpool in the wake of Hillsborough. Where these intersect his legend is forged.

Critically, Dalglish is not revered just from his time as Liverpool manager. Indeed, and it may not be the popular view, there are those who will vociferously argue around the pubs of Anfield that Dalglish was the cause of the beginning of the end of the Liverpool dynasty. They’re wrong. That was Souness.

Joe Fagan, at the helm for just two years and the only Liverpool manager to oversee a treble, is the thinking man or woman’s boss of choice. Criminally underrated, you can see why. However, the very fact that such a successful manager, pro-rata, isn’t given the Godhead status of Shankly, Paisley, Dalglish, Benitez and even in some quarters Houllier, tells you that he is missing one of two ingredient that turns men into idols: Desperation for change or force of personality.

You might want to erase it from your memory but there was a time in 2013/14 when Rodgers was considered the [insert number here] coming. Results and the possibility of a league title were the catalyst for the declaration of love. But the seed had been sown when after Hicks, Gillette, Hodgson and a poor end to Kenny last campaign, a young manager, a fresh start and talk of new philosophies were welcome because simply, they were just something different.

It was the same with Houllier. His professorial style and his insistence on discipline both on and off the pitch was counter-intuitively a breath of fresh air after the cavalier football and perceived cavalier behaviour of player under Evans had plunged the club into stagnation. He backed this up with a haul of trophies of which a generation of Liverpool supporters had never experienced such like. A lowly end to his tenure saw him lose many followers for good, but for others he still holds a dear place.

And then there’s Rafa. And then there’s your force of personality. Yes, there’s the European Cup, the FA Cup, the annual Champions League qualification you took for granted, the acquisition and development of some of the best players seen at the club for years, and there was the catalogue of iconic games. But, and it’s something non Liverpool fans can ever seem to grasp, and indeed some of our own, it is the actions of the man who put him up on the clouds. Rafa fought tooth and nail for the club. He was cantankerous but generous; his donations to the Hillsborough appeal just one example. He reflected how many Liverpool fans see themselves. Like Houllier, by the end he’d lost many. But for the rest of us? Well, it’s hard not to love someone when they clearly love you.

Back to those critics.

In Klopp, in Rodgers, in the second coming of Kenny, in Rafa and in Houllier there is some substance to the claim that Liverpool fans actively seek to believe in their managers and throw caution to the wind. It’s no surprise that this happens in the period in the twenty-six years since we have won a league, and begins after seven years, when it finally sinks in that it might not be happening any time soon.
Like the old man who has never been to church in his life but then attends every day as his mortality dawns on him it’s easy to empathise, should you choose to.

Crucially, however, there’s a self-awareness amongst Liverpool fans. No one is blindly faithful. When the now infamous framed ‘Rafatollah’ picture was paraded, the tongue was firmly in cheek. Reclaim the abuse. Own it. Embrace it. Laugh at it. Make it part of your identity.

That ‘special relationship’ between Liverpool supporter and Liverpool manager is actively sought after. It distinguishes us from the rest. Not every manager is afforded it. It’s not a default setting but for a club who’s modern existence was formed on the back of one man we are clearly primed for it. It’s now part of our DNA. It just needs to be nurtured correctly.

Yes. Liverpool supporters reach out and touch faith. Deal with it.